What do venture capitalists know that everyday people don’t?

The #1 thing they know is the power of Power Laws.

They know that going long is totally worth it if you have something. That a company worth $10m today, that grows and does well, becomes worth $20m tomorrow, then $100m, then $200m, then $1b, then sometimes even more!

Take a look at the growth of Salesforce’s market cap / valuation: 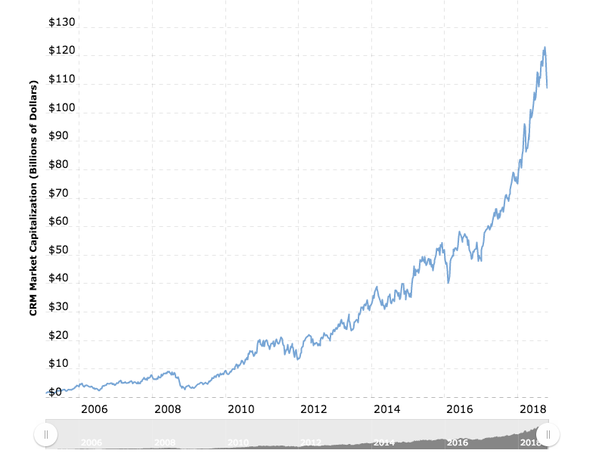 As a founder, it’s harder to “feel” this when it never gets any easier. And even the CEO of Salesforce sold most of his stock already … which is telling,

But power laws sound like an annoying VC-ism, but they are so true.

In the beginning, think in terms of weeks and months. Then quarters.

But once you approach $10m in ARR … you can begin to start to think in terms of decades. Once you get there, if you have something good, the value of your equity and hard work starts to really compound into something serious. Owning 10% of something worth $10m is great. Doubling from there? Now you are worth $2m on paper. But double from $1b — and you’ve just added $100m (!) in equity value by doubling.

A bit more here: SaaS: Maybe Plan for 30+ Years as a Founder | SaaStr