The data in everything in venture is … mixed.

Yes, the crazy outperformers in venture are smaller funds, from Lowercase Capital to Benchmark, etc.

But the goal overall is to significantly outperform the market (+50% higher) to account for risk, while rewarding those who can afford highly illiquid investments (universities, pensions, etc).

Very large funds will struggle to produce the insane 8x-10x+ returns of a super successful tiny find with a decacorn or two in it.

Hence, even with some challenges to Uber’s IPO, Vision is already substantially in the money, at least on paper: Masayoshi Son claims Vision Fund LPs are already up 45% — but that’s mostly paper gains – TechCrunch 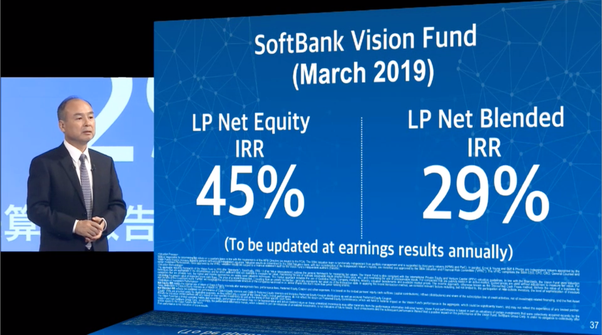 So yes, Vision’s multiple isn’t as high as a top tier early stage fund. But it’s IRR might be close, at 45%. Because it invested later in big winners.

Small funds can be great. But they are a lot of work for a very large LP that wants to deploy a lot of money. Too much work, really.