When Should You Add a Second Product?

Both are two of the most impressive and inspiring public SaaS CEOs — but their products and companies couldn’t be more different.  Veeva sells eight figure deals to a very small number of very sophisticated customers, while Twilio has a huge long tail and starts at $0.0085 a minute. 🙂

But I wanted to pair them for several reasons.  One was to get a sense of what the bar was to pull off a successful SaaS IPO these days (answer = oh man, very high).  Another was to see examples of some relatively capital efficient companies (Veeva raised less than $10m in VC money on the way to $6 billion in value!).

And a third key point was to learn about a subject I think about a lot, which is “When is the right time to add a new product?”

Adding a new product line is incredibly distracting.  It’s not just building the 1.0, that’s the relatively easy part.  But it gets incredibly complicated after that.  Do you have two sales teams?  Who gets what part of the long-term development budget?  Where does marketing allocate its resources?  And most importantly, multiple products can be very distracting at the management team level.   The new product tends to dominate the discussions, yet by definition, is only a tiny percent of the revenues in the early days.  The last thing you want the team doing is chasing a shiny penny, when what really matters is hitting the plan for the quarter.

The answers from Twilio and Veeva were radically different 🙂

Jeff Lawson of Twilio’s answer, as you might expect from a B2D company, is basically — just try it.  Especially if there appears to be demand.  If you can build it fairly easily, and the customers want it, try it.  You can always kill it later.   And clearly, this has worked very well for them — at least up to $1B ARR and beyond.  Then, they bought Sendgrid and Segment to add on big additional product lines.

Peter Gassner of Veeva’s answer was seemingly the opposite.  His point was first, don’t take the easy route.  Your customers will want things that are fairly easy to build, and you’ll understand those problems well, because they are adds-on to what you are already selling.  But his point was these rarely move the needle.  You don’t want a new product to add 10%-20% in revenue … you want to build a new product that can do 100%+ of your existing product’s revenue.  Otherwise, it is too distracting and won’t ultimately move the needle.  So he challenged us to move out of our comfort zone in wanting to build the easier, but ultimately smaller add-on products, and take bolder steps.

Veeva did this, adding a second core product, its Vault to its Pharma CRM.  The overlap wasn’t huge, and in fact is diverging more over time — but the impact has been tremendous to the top line growth.

And since then, Vault has out-accelerated their initial product, CRM: 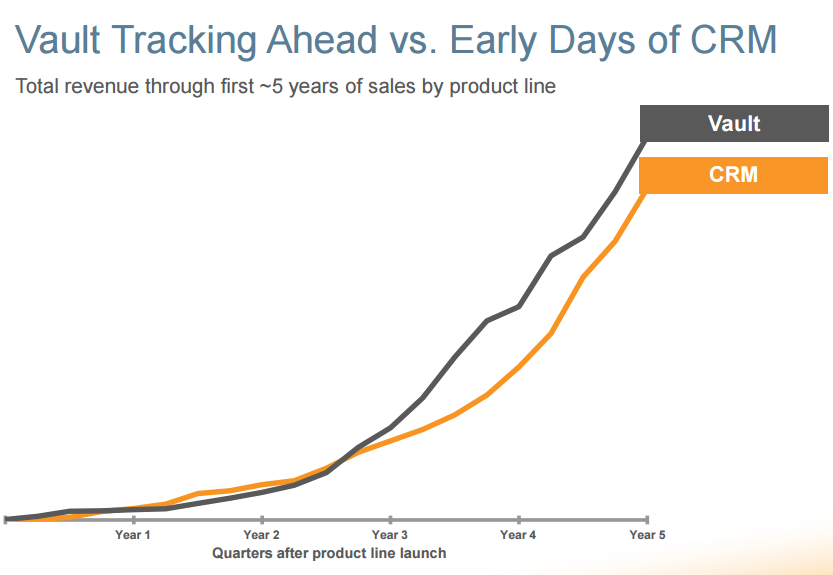 Now fast forward to 2020, and Vault has become not just Veeva’s largest product line … but its future:

So what should you do here?

I wish I had some magic answers.  I struggled with this a lot myself.  In my first startup, it was clear to me that nothwithstanding closing $6m in revenues our first year, that our TAM was likely less than $100m.  So we built a second product line our first year.  We knew we had to.  So I wanted to start as early as possible.

At Adobe Sign / EchoSign, I wanted to do this early too, but it was just too distracting.  The product went from simple to very complex as we served more nuanced enterprise needs.  The demands there were so heavy on the organization that there was no way, at least until $15m in ARR, at least, we could ever have launched a real second product.  Although I spec’d out several.

Most Big Companies end up solving this with M&A, at least in part.  Salesforce’s Marketing Cloud is a huge revenue driver, and a large percent of it and almost all the Commerce Cloud is from acquisitions:

But a few learnings from companies I’ve worked with and observed:

Good luck.  This stuff is tough.  Just plan in the back of your mind on building a second product by $100m in ARR. 🙂

You Probably Need A Second Product to Really Go Big. At Least By $1b In ARR.