If you’ve been binge reading our content lately, you’ve probably noticed an increasing number of posts about the SaaStr Annual — our yearly show in the San Francisco Bay Area that brings together the best & brightest minds in SaaS.

But if you haven’t had the chance to attend the show before, you’re probably asking yourself:

WHAT IS SAASTR ANNUAL?

It’s the largest gathering in the world for B2B software. Its humble beginning started back in 2015 as a 1-day event with 2,000 people and has since grown to a 12,500 – 15,000 person, 3-day+ event in 2019. It’s an event where SaaS greats and legends, like Jeff Lawson, Leyla Seka, Stewart Butterfield, Therese Tucker, Aaron Levie, and many more come to pass on their knowledge and hard-earned lessons to the SaaS community.

It is the place to come learn how to scale and grow your business and take it from $10 to $100 million with less stress and more success. Each and every attendee leaves with multiple notebooks and Google Docs full of notes and learnings to implement and take back to their team. And it’s not just the content and speakers — the networking, mentoring and VC sessions are all part of what makes the Annual stand out. You’ll walk away knowing you’ve met new friends, found an amazing mentor and benefited from hearing different perspectives on how to build a business.

Past Annual venues have included iconic San Francisco locations like the Masonic and Bill Graham Auditorium, but as we’ve grown to the largest non-vendor event in the industry, we’ve been maxing out every venue in the city.

So for the 2019 Annual, we’re moving to a space that literally 350% bigger than last year’s venue — the San Jose Convention Center.  More space, along with adjacent venues will give us x4 the floor space of last year, which means room for 5+ stages, and new this year, we’ll be adding over 500+ mentoring sessions including AMAs, Braindates, VC Matchmaking and more.

We’re also expecting attendees from more than +50 countries to make the trip next year, which makes this venue even easier to get to for all the out-of-towners. It’s a short 5-minute Uber from the San Jose Airport and the convention center is just steps away from some great places to stay, so stay tuned for discounted attendee rates coming soon.

We already have some great speakers lined up, from the CEOs of Hubspot, Y Combinator, WP Engine, Peek, Zendesk, Tradeshift, Flexport, Algolia, Zoom, Mixmax, Glassdoor, Hired.com and more! We’ll be keeping adding a ton of leaders in revenue and product, including the CROs of New Relic, Brex, and many others, and top VCs from Brittany Skoda, the new VP of Investments at Workday, to Megan Quinn, General Partner at Spark Capital, to our always popular State of the Cloud with Bessemer Venture Partners, and many others.

If this will be your first time attending the Annual, or if you want to re-live some of best sessions from 2018, then this playlist of sessions below is for you!

PS — If you’re a founder, CEO, CXO, or VP of an early, growth, or scale stage SaaS company that’s always dreamed of speaking at the Annual, submissions are now open and we encourage you to read our guidelines and apply to speak!

We had a constantly popular SaaStr Square Park area last year where attendees could mix & mingle, and next year we’ll be bringing it back, as well as even more ways for you to connect with your fellow peers by role, department, and company stage. We’ll have a bigger Braindate lounge too! This peer-to-peer mentoring program has already been a huge hit at last year’s Annual and SaaStr Europa and consists of one-on-one and small group sessions where you can either learn something new or share your SaaS knowledge with others to build up your network and meet like-minded individuals.

Trust us when we say you’ll want to make time to go on a few Braindates and check out the Happy Hours in between sessions.

@saastr 2018 is the place to be to network with ambitious and innovative #SaaS executives. There’s no doubt that the SaaS sector is growing and thriving! #SaaStrAnnual #Saastr2018 #cloud pic.twitter.com/nLrA1KgWiL 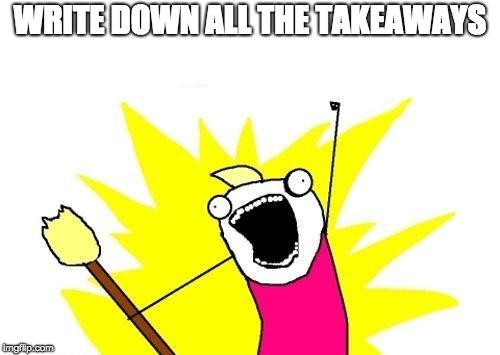 You’ll leave the SaaStr Annual with pages and pages of insightful takeaways but don’t just take our word for it. Here are some of our favorite wrap-ups and takeaways from past attendees:

“Even with all the emphasis at SaaStr Annual on ARR, in the end, the learnings go way beyond how to grow revenue. And ultimately, that’s the allure and power of the event: attendees come to get the tools to build and grow a company from startup to a billion dollar buy-out, but, equally importantly, we all come to have some fun along the way, and for the assurance that we’re not doing it alone.” SaaStr Annual 2018 Wrap Up by Zuora

“For me, networking at a conference can be overwhelming. Braindate gave me the opportunity to spend positive, focused, one-on-one time with people I really liked and expect to stay in touch with. More importantly, this was an opportunity for founders to ask questions they have been needing to ask. At sessions with hundreds of people in them, there is a lot to learn, but it’s hard to customize. These sessions put the founders in conversations with experts who could answer their questions whether it was about sales, ops, legal, tech or AI. It was great to watch and participate in.” What Happens When You Have Braindates with Founders

“Now, I’ve been to lots of events—some really big ones—but nothing prepared me for SaaStr. I had been told this event would be big and that I needed to be clear on what I was looking for from my first outing. I was skeptical but figured I could go to San Francisco looking to learn more about three topics: Building customer engagement, Scaling in North America and Which megatrends are on the horizon. I left with a whole range of new thoughts on all three, plus a whole bunch more. This was SaaS energy in one place like nowhere else.” Why Nothing Quite Prepared Me For SaaStr

“SaaStr has now established itself as the preeminent software-as-a-service conference attracting thousands of founders and their teams from all over the world. It’s a chance to take a break from the day to day insanity that is being a founder of a startup to immerse yourself in learning. It’s an opportunity to learn big lessons from heroes (Mike of Atlassian, David Skok, Christoph and Tomasz) but also tactical lessons from those you didn’t yet know you should be in awe of.” 100 Lessons Learned from SaaStr 2018

We had 10% VC investors at this year’s SaaStr Europa and 7% at last year’s Annual, so expect it to match Europa and jump to 10%+ as well. Each year, hundreds of VCs fly in from all over the globe with their partners to find the next great Unicorn. If you’re a Unicorn in the making, an established startup raising your A or B, or an early-stage Founder looking for your first Angel, the VC you want to meet will be there.

Stay tuned because we’re already hard at work on ways to meet a VC or meet a potential portfolio company even easier for 2019! Plus — VC day sessions will be back on Thursday! These sessions have been growing in popularity each year and are hyper-focused, super tactical sessions where the VCs pitch YOU and give insights on what they look for in a potential investment. We’re proud to have grown to > 60% women and multicultural speakers at the 2018 SaaStr Annual, and we’re aiming to surpass that number in 2019.

Our bigger goal is to drive our attendees to similar levels of inclusion and diversity. We at SaaStr firmly believe that true innovation depends on hearing from, meeting with, and listening to people with diverse perspective. We want our events, and the community that participates in them, to include, encourage, and recognize people of all races, ethnicities, genders, ages, abilities, religions, sexual orientation, and military service.

In an effort to reach those goals, we’re going big and setting aside 1,000 full, no-cost passes to the 2019 SaaStr Annual for applications to our Diversity and Inclusion program. And if you’re interested in being considered, we encourage you to apply now! As crazy as it sounds, all 1,000 will be spoken for before the end of the year.  We’ll assign them in batches of about 100 so if you don’t hear back soon, that likely means the first batch has been released and we’re holding for a moment on the next batch.

From Pendo.io tweeting that they “closed more business from #SaaStr than any other conference combined,” to Cari Goodrich of Looker boasting that got the “most meetings from a show in the company’s event history :)” — it’s clear that if you want to meet current and new customers alike, you should sponsor the Annual.

We understand how much work “doing a show” is, so we designed our event to not only be the #1 event in the industry but just as importantly,  have constant traffic.  We center mentoring, Braindates, food, and evening parties all in the sponsor expo.  And the expo itself is sandwiched right in-between the largest / keynote stages. You’ll have prospects and customers come by from the early morning until the evening — all 3 days.  Expect much more traffic and general energy than at almost any other event you might sponsor.  The expo isn’t off to the side, or in some other building.  It’s the hub of the event.

For 2019, we are offering a wide range of exciting opportunities for our partners to be involved in our community and reach your goals. Reach out to our team if you’re even vaguely thinking about sponsoring the Annual. They will be happy to explain all the options and ideate with you on sponsorships.

Trust us, no matter what reason you come to the Annual for, whether it’s #2 or #7, or all 7 reasons — you’ll be glad you did. And if you just can’t wait to attend now, use this link to take advantage of 20% off your ticket and we’ll see you in February!