When a VC Investment Fails, Does That Mean It Was a Bad Investment? Probably Not

With venture capital investments that fail, is the problem most often with the entrepreneur or was it a bad investment by the VC?

There often is no problem.

The earlier stage you invest, the more often some of them just … don’t work out.

Bill Gurley’s answer to How much money did Benchmark capital lose on Webvan? 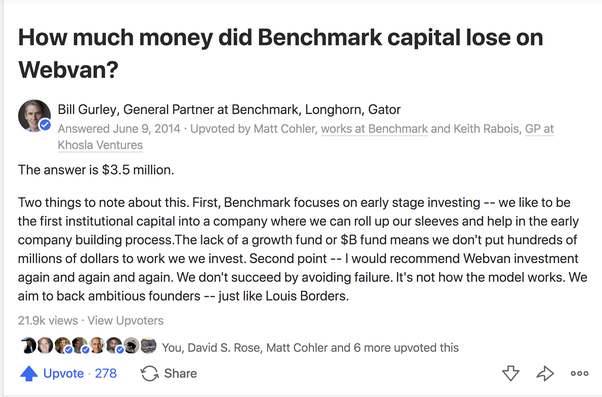 The above answer on Quora from Bill Gurley sort of sums it all up. He and they are some of the most successful investors of all time.

But some just don’t work out, even with the best CEOs and founders. Especially when you invest early.

Every VC investor has a model for loss ratios. Both in terms of how many start-ups in their portfolio are modelled to fail, and what % of the capital in that fund is modelled to go into losses. It’s often around 40%/20%. I.e., 40% of the portfolio will be a partial or total loss. But due to managing future checks, that only consumes 20% of the fund.

Now imagine you invested in, say, Zoom and own 11%–12% like Emergence and Sequoia do.

That’s a $4b gain for each fund. More on the math here: What has a higher chance of making you money, being a venture capitalist or a startup founder?

It almost doesn’t matter what happens to the rest of the portfolio in the fund.

So you bet on all the Eric Yuans you can. If just a few work out, that’s plenty. The rest don’t need to. You hope they do. But they don’t need to.