It’s really one of the great questions for 2022.

Where is the best place to launch a B2B startup — when almost all of us are now running distributed teams? And when VCs are now all comfortable investing over Zoom? And when San Francisco is still a bit of a sad wasteland, at least SOMA?

So the benefits of the Bay Area are not so much of a slam dunk as they used to be. And the benefits of “second cities” in SaaS are real. New York, Salt Lake, and Atlanta in particular, and London and Paris in Europe, are probably even stronger than ever. Making it in some ways tougher to move to the Bay Area if you are based in the “Second Cities of SaaS” and doing fine there.

Still, look at this chart from our LinkedIn page, which is 95%+ SaaS executives: 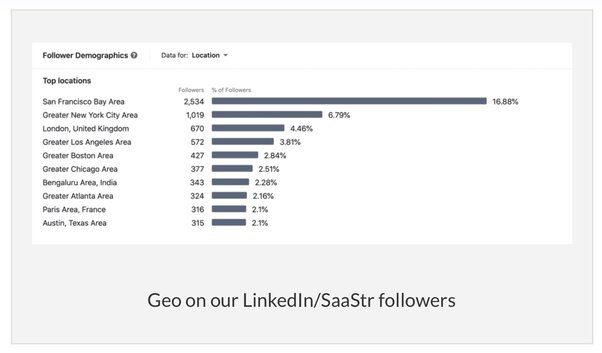 Even with all the changes since March 2020, SF Bay Area still has 2.5x the SaaS density of New York, and 4x London, and 8x Austin.  That’s something.  At least, for some SaaS startups.  If no longer all of them.

For many founders, it’s still worth it to come to the SF Bay Area, even now. There are still more executives, more customers, and more partners here.

It’s just the relative advantage is smaller than before. VCs are everywhere, as are SaaS startups now. So if you can thrive from elsewhere, for real … I’m not sure I’d move today.

A bit more here in our review of our latest SaaStr trip and meet-up in Miami:

My quick review of Miami for SaaS:

Be Back Bigger in 2023!! pic.twitter.com/9LbCkSODPi