What is the shortest time it took for a company to go from concept/launch to their IPO?

Q: What is the shortest time it took for a company to go from concept/launch to their IPO?

It IPO’d later that same year of launch.

“No software” and the internet are great.  But shipping the stuff on floppies seemed to work just fine as well.  And it seemed to really minimize dilution (see founder stakes below). 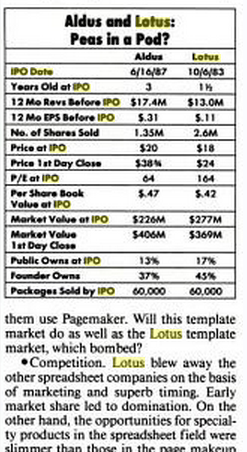 Now, times were different.  Lotus quickly become a unicorn even by the standards of the day.  But an IPO back then was in any ways like a late stage financing today.  It was the only efficient way to raise a larger slug of capital.

Anyhow, even after in the end, “losing” this initial market to Microsoft … Microsoft / Bill Gates still bought the company for $3.5 billion in ’95.  Not too shabby.